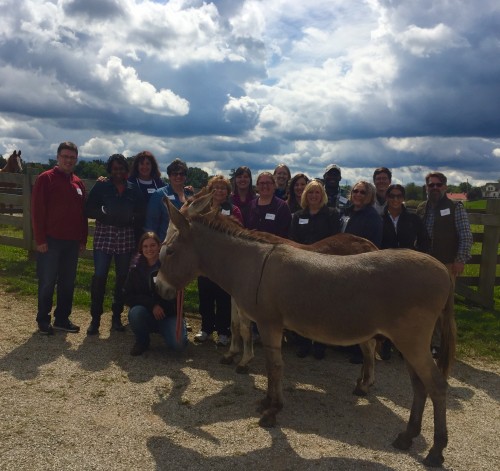 This time Doc wanted to go to the farm without me. Since I had ended the relationship with Cupcake the pig, she didn’t think that it was time for us to be near each other just yet. ” It can take time to heal and today there is a work field trip. I need to be able to focus without worrying about any drama,” she said. But after some groveling and me convincing her that I am mature enough to handle the situation, she told me I could come as long as I kept a low profile.

It really was a beautiful fall morning to be out in the country. As Doc’s co-workers emerged from the van you could see by the look on their faces that they were happy to be out in nature. The purpose of today’s training was to learn how working with horses and donkey’s in a therapeutic way can help the patient’s we serve. In the same way I assist Doc at work, reconnecting humans with nature and animals can assist those in emotional pain to feel safe enough to  open up in ways traditional therapy cannot do sometimes.

As I lay quietly on the other side of the fence, I watched as everyone communed with the horses, participating in different activities that would help them to understand how Equine assisted therapy works.

After a short break, everyone moved inside to the arena to work with Rusty and Dusty my favorite donkeys. They were given an activity to complete that include moving the donkeys through some obstacles. I have to say, for beginners they did a pretty good job, but I had to chuckle when Rusty and Dusty decided to only go so far and then stop. After a while the humans figured it out by looking at it from the donkeys perspective rather than their own and Rusty and Dusty were then happy to move ahead.

That’s an important lesson to learn. Sometimes our biggest road blocks with others come from not being willing to look at the world from someone else’s perspective. It’s easy to get stuck inside our own egos thinking that our way is the right way, but that is often far from the truth.

After watching that activity, a light bulb went off in my own head. I decided to mosey over to Cupcakes pig sty to make amends. Cupcake was more that gracious and we decided we could be friends. None of this escaped Doc and as we rode home she remarked “This was a learning experience for everyone, even you Grover.”