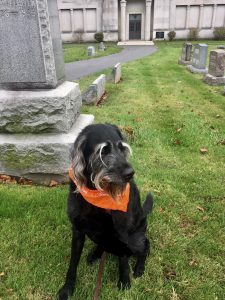 Anytime someone says to you “Lets go to the graveyard on Halloween night, it’ll be fun…” run the other way.  So, I allowed her to talk me into going because Doc usually makes very rational decisions. In hindsight, we should have stayed home like normal folks and passed out candy to the kids. Instead, we went on a ghost adventure and ended up in a frightening mess.

It was an hour before dusk when we headed for the grave yard. We drove cautiously as there were children out and about in their costumes. Obviously distracted by their visions of bringing home the biggest candy haul in history. After driving to the out skirts of town, we came upon the entrance to the graveyard. From a distance it looked rather peaceful, but once I left the safety of the car I started getting the willies.

The sun was setting quickly. I just wanted to appease Doc, get the heck out of there and go home. But Doc wanted the grand tour, so as we approached the back of the cemetery there was a large mausoleum. “What are we doing here and what is this thing?” I asked. “There are people buried in there and they say if you knock on the mausoleum door you will hear someone or something knock in return”, she said. “Well why would we disturb the dead?” I asked, “That’s seems rude, don’t you think we should have called ahead to say we were coming?” Doc wasn’t listening and headed straight for the door. I gasped as she lifted her hand and  banged on the door so hard, you could hear the echo inside of the chamber. We waited for a while and heard nothing. Thinking we would now leave, I turned toward the car.  Then I heard Doc pound on the door again, but this time so hard that I’m sure it awakened the dead inside.

Both of us stayed silent for a while, listening for any sound. It was eerily quiet and Doc had  just about given up, when a low groaning sound could be heard on the other side of the door. Slowly the door of the mausoleum began to push open. Shaking with fear, we turned and ran for our lives before whatever was inside emerged. I swear to you, Doc jumped over those grave stones like an Olympic hurdler. It was impressive.

Once we were safely inside the car with the doors locked, I glanced back at the mausoleum door while we were driving away. In the light of the moon, I could see that the door was wide open. Whatever had pushed it open was nowhere in sight. I glanced over at Doc, looked her in the eye and said, “NEVER AGAIN.” Shaking with fear, she nodded her head in agreement. ” Don’t worry, this is the last time we ever make a visit to a graveyard on Halloween or any other night.”