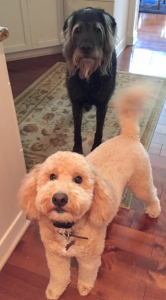 My friend Norman stopped by the other day to spend some quality time together. We played and hung out but he started getting on my last nerve when he was trying to get Doc’s attention every time she came into the room. After all, she is my human mother and he has his own family that will pay attention to him. I noticed he was using his cuteness to get Doc’s attention. I don’t want to accuse him of being manipulative but you know how the saying goes “If it quacks like a duck…”

After Norman left I decided to have a conversation with Doc about how I was feeling. She sat quietly and listened as I went on and on about how I wasn’t happy about Norman’s behavior.  When I was finished Doc  looked at me and said, ” psychiatrist Carl Jung once opined that everything that irritates us about others can lead us to an understanding of ourselves.” ” What are you saying? ‘ I asked Doc. ” When some other human or dog’s behavior irritates you, use it as a mirror. Maybe you are judging Norman so you don’t have to look at your own insecurities, anxiety or whatever it is that you are really feeling. Only you can figure that out by being honest with yourself” she said as she walked out of the room.

Doc may be right, but I hate it when she points things out and then I have to go and think about it. After some reflection I realized that I was jealous of poor little Norman and the attention Doc was giving him. It just stirred up my insecurities and fear that Doc would end up loving another dog and replace me. I know that’s not even close to true because I know Doc has enough love for many animals and that I am always her #1 but that’s what fears often are, irrational thoughts.

Later in the day I went back to Doc and told her I had figured it all out. “When I learn to understand and accept myself including all my flaws and feelings it will also help me to tolerate and allow others to be themselves too” I told her with a smile. “Grover, she said, you are one smart puppy!”