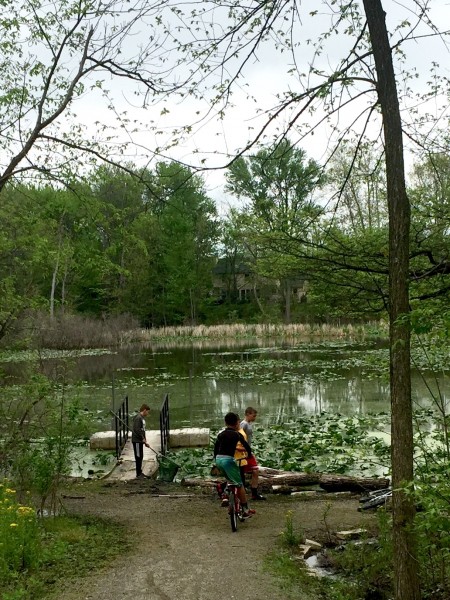 Many of us dream of traveling to exotic lands, but often times the most magical places can be found very near our own back yards.

Our adventure started with a simple conversation I overheard Doc have with her nephew Scott while they were having Sunday brunch. He asked her if she had ever been to a wetland park within walking distance of her house. Now Doc and I regularly explore every park in the area, but had never heard of this one, so our interest was piqued. Scott said the entrance was very hidden and as a young boy he and his friends stumbled upon it one day while they were out riding their bikes.

Even though it was suppose to be an overcast day, we decided that on Monday after work, we would set out to find the park. After driving down a few streets looking for the entrance, it appeared before us, the path hidden between two houses. Exiting the car and heading down the sloped gravel path there was a sense of excitement about what we would find. The smells were all new to me, so I was in hog heaven. As we came to the clearing I heard Doc gasp. I looked up to see the most beautiful large pond teaming with lily pads, ducks and geese swimming and fish bubbling to the surface. Rounding the corner,we looked up in the trees overhanging the pond to see a large Blue Herring sitting quietly observing the scenery.

Around every corner there was something new to explore. A babbling brook running into the pond, yellow wild flowers in full bloom and a fallen tree making a bridge for the squirrels to cross over the water. It was almost too much for my dog brain to take in all at once.

Heading down the path and across a low bridge, Doc paused to take some pictures. That was when the honking of the male goose sounded the alarm. Doc oblivious to the warning, didn’t even notice as the gestapo gaggle of about six geese and four ducks acting as backup bouncers came swimming toward us at a rapid speed. I began to growl to get her attention and she looked up just in time for us to hightail it across the bridge to safety. Crisis averted.

As we were heading back around the pond to the entrance we saw three young boys coming down the path on their bikes. Holding buckets and fishing nets, Doc smiled to herself and I knew she was thinking of her nephew Scott, long ago as a young boy the day he found this magical place with his friends.