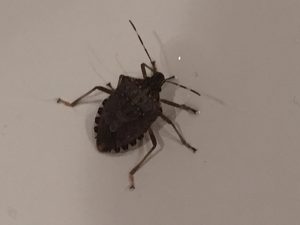 Me thinks that the long, dark winter has finally affected Doc’s brain. The other day I heard her talking to someone in the bathroom. Since none one else was home at the time I decided it best to investigate. Much to my surprise and dismay, not only was Doc talking to a stink bug that was sitting on the counter, but she was calling it Walter.

Hoping she didn’t notice the wide-eyed quizzical look on my face, I sat silently until I just could’t take it anymore and spoke up. ” Doc!….why on earth are you talking to a bug, and how do you know it’s name is Walter?”  Her response left me scratching my head because I would have never expected the answer she gave me. ” I am talking to a bug for the same reasons I talk to you and call you Grover, because it comforts me.” she said. ” But it’s a bug!” I protested. “You know they hitched a ride over to the US on a slow boat from the middle east and on top of that if you crush it, it smells like a dirty sock.”  I complained

” Are you done with your diatribe?” she asked. ” I nodded my furry head in response. Slowly  she sat down on the side of the tub, looked at me and explained that the bug just came in to get warm from the cold. “Instead of flushing it down the toilet like it didn’t matter, I decided to watch it and get to know Walter on a more personal level.”  she said. “Why just this morning I could’t find him and that little stinker was hiding behind the picture on the wall by the sink.”

Poor Doc, I am praying for an early spring. I think she just needs a good dose of sunshine to clear her head. But for now, I guess Doc, me and now Walter will hunker down until warmer days arrive and Walter can go back outside.