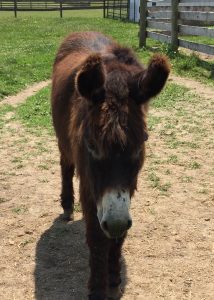 Today I am going to tell you a story about sensitivity, intuition and the healing power of two donkeys named Eddie and Oatmeal. Eddie and Oatmeal reside on a farm in Ohio with some horses, a pig named Cupcake and assortment of nice dogs and cats. All the animals at this particular farm work as therapy animals, meaning they are trained to comfort people going through some difficult times in their lives. Doc and I know this menagerie of animals, as this is where Doc takes her patients to engage in Equine Assisted Therapy.

On this particular Saturday, Doc was at the farm to do some training. What the people at the training did not know was that a few days prior, Doc had lost her beloved Aunt Pat at the ripe old age of 93. Thinking that going to the farm and focusing on learning new therapy skills would bring some respite from her grief, she decided not to tell anyone and swore me to secrecy.

As we entered the arena to start the training, Doc was given the task to help a woman work through her fears, one of which was a fear of horses. They decided to start with donkeys as their smaller size can be less intimidating.

In to the arena sauntered Eddie and Oatmeal and before the lady could even become too frightened, the donkeys moved away from her and toward Doc. Doc tried her best to redirect the two back toward the lady, but they would not leave Doc’s side. Slowly they moved in as close as they could on either side, leaned against her and began to softly bray.  The jig was up, they could sense Doc’s sadness and were comforting her.  I wasn’t surprised when I looked over and saw Doc’s eyes glisten with tears. The lady was so astounded by the gentle beasts, that she walked over and began to stoke their heads without reservation.

After reading this tale you may be left thinking that Donkeys and other therapy animals have some magical psychic powers, but the truth is we embrace what many of you have forgotten. Silence is our super power. Only through silence will your spiritual eyes open to the world and expand your sensitivity to others. Something we could use more of right now.