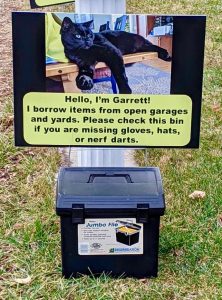 Although I don’t talk much about the relatives, I do have a cousin named Garrett that happens to be a cat. He lives way up in Michigan and apparently the winter has become so harsh and boring that my cousin has resorted to becoming a cat burglar.

His crime spree all started when Garrett’s human mom started to notice random items like gloves and nerf darts showing up at her house. Puzzled, she just thought some kids had left them in the yard while playing and didn’t pay much attention. But over time the items increased. There were hats, seat covers and one day a watch appeared. It didn’t take her long to uncover who the culprit was. The strange thing about it was that cats usually bring home dead mice or chipmunks to their owner, but apparently Garrett had not gotten that memo. Garrett had decided that ordinary rodents were not good enough for his humans. No, he went straight to high ticket items he though his humans could use.

At first his human went door to door trying to return the items. She even made Garrett write apology notes to the people he stole from and made him swear he would stop his night time thievery. I know that Doc would be appalled if I engaged in any kind of stealing and I would have some big consequences if I even thought of trying anything like that. Apparently the cats in Michigan run wild.

So to make a long story short, Garrett continued stealing, so the only thing left to do was a public shaming. His human went to the sign shop, had his picture placed on a big carboard sign with a note that said “I borrow items from open garages and yards. Please check this bin if you are missing gloves, hats or nerf darts.” The sign is on the mailbox out by the road so that everyone can see it and check for any stuff they are missing.

I guess that’s how they resolve things in Michigan but I told Garrett not to even think about stealing any of our stuff when he comes to visit. It’s shame to think that I would need to frisk my cousin on his way out the door.