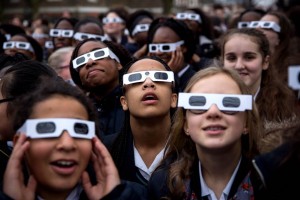 The eclipse that will happen to on August 21 is a big deal to humans. The last time there was a total eclipse that traveled coast to coast across the United States was 99 years ago. Where Doc and I live, the moon will cover 86.3 percent of the sun. Darkness will fall for as long as two minutes, 40 seconds, enough time that I can take a little nap.

Doc doesn’t understand why I am not more excited about this event. She has even gone out and bought us special glasses so that we can look at the eclipse without burning our eye tissue. “It’s otherworldly!” she says to me in a breathless voice. I guess it depends on your definition of otherworldly. Now if you told me that as the eclipse occurs that UFO’s will start shooting out of the sun and head toward earth, now that would be an interesting show. Otherwise, I am just not interested.

So, I will leave it to the humans to be excited and I promise not to spoil Doc’s fun. But for this dog, the eclipse will only cue me and the rest of nature that it is time for bed.