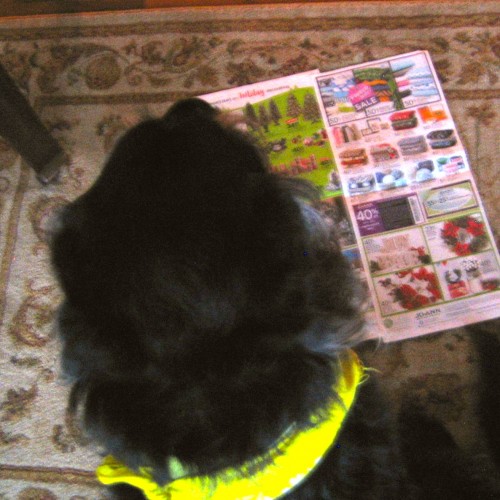 As I watched the family planning the Black Friday shopping trip after Thanksgiving dinner I thought about how someone like General Patton would be proud. They must have been a little woosey from the all the carbohydrates and the tryptophan in the turkey because the trip they were planning could only been carried out by US Army Special Forces. Well, what do I know, I’m just a dog and so I just kind of roll my eyes and listened to their grandiose plans.

They scoured over those sale circulars like they were the map to a secret treasure. As Doc was handing out particular assignments for each family member, I knew things would deteriorate quickly. Now don’t get me wrong, some of the rules were helpful, like grab a shopping cart when you get inside Wallmart and don’t make eye contact with any other shoppers. But telling Suzanne to go to the electronic department while Jen goes to the toy section just won’t work. I have watched those two get sidetracked just trying to cook dinner.

After sleeping a few hours the family woke up in the middle of the night. With coffee in hand they went out to the mall, steely eyed and confident. I stayed home and napped off and on, watching a little football with the left-over cousins that were smart enough to stay home.

The bang of the back door and grumbling voices interrupted me from my third nap. In came the troops looking defeated, stressed and angry. This was not the triumphant return I was expecting to see. They complained about the traffic, other shoppers pushing and grabbing and not enough of the sale items. They even threatened to cancel Christmas. “Cancel Christmas!” I thought with horror. This calls for an intervention.

After nudging the angry group toward the kitchen table with the leftover double chocolate cake, they started eating and soon the sugar and chocolate kicked in to their brains. Before long they were relaxed and laughing about the day. Crisis averted. The one thing I know about humans, is that even Christmas can be saved with a little chocolate.