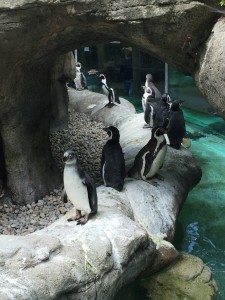 After filling my belly with turkey, some stuffing and a little bit of gravy that Doc let me have, I settled down for a nap while listening to the family discuss Black Friday shopping. Since Doc’s arm is still in a sling from her surgery, we all decided it was not a good idea for her to tackle what can be the unruly crowds trying to shop. She was too tired after hosting Thanksgiving, so I don’t think she wanted to do anything but rest on Friday anyway. Some of the family was going to the zoo the next day, so I decided to tag along and boycott Black Friday.

After venturing out of the house, we found heavy traffic and lines everywhere, even at the zoo. I was surprised that when we came to the penguin exhibit, even they had formed a line like there were mark-downs on fish that day. It made me wonder what motivates people to leave the comfort of their homes and family to seek out bargains on stuff that they either think they need for themselves or want to give to others.

There was a very funny comedian named George Carlin that said “The meaning of life is trying to find a place to keep your stuff. Your house is just a place to keep your stuff, so that you can go out and get more stuff.” I agree with George, humans love their stuff and they especially love it when they can find “stuff” marked down, which brings us back to Black Friday.

Everybody gets stressed out during the holiday season trying to buy things for others and many times they overspend to the point of going in to debt. Now I am just a dog, but I don’t think that’s very good for you to be fretting over such things. It’s my advice that we all need to take a step back and really think about what is important during the holidays. For me, that is spending time with Doc, and keeping the real meaning of Christmas in my heart by giving to those that are really in need of help. Now doesn’t that sound better than fighting over marked down flat screens at Target?