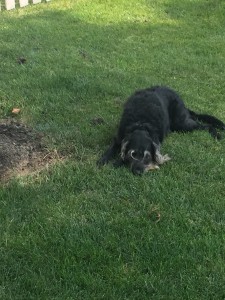 Thinking Doc was inside and too busy to notice, I slowly made my way over to the base of the Maple tree and began digging in the dirt with my two front paws.  The faster I dug the higher the dirt flew. What a rush. I have to admit I was feeling some guilt, but not too guilty to stop.

While I continued my excavation work, I recalled that just the other day Doc was bragging to the next door neighbor about how she had gotten me to stop digging in the yard when I was a puppy.  After watching Norman, the new puppy next door having so much fun digging in his yard, I guess I fell off the proverbial wagon.  I rationalized what Doc didn’t know wouldn’t hurt her. Boy isn’t that one of the big lies we often tell ourselves to sooth our guilty souls.

Being so lost in my digging, I never heard that back screen door open. The first thing I noticed was Doc’s shadow in the grass next to me. In a flash I stopped what I was doing and tried to lay myself flat enough in the grass to appear innocent. The next sound I heard was the click of Doc’s smart phone as she took a picture of my dirty deed. ” Just admit what you did, she said in an exasperated voice, you’ll feel better. Now come on over here and put the dirt and the mulch back around the tree.”

I did what I was told without even a whimper. Putting all of that dirt back was a lot of work. It made me realize a few minutes of mischief is not worth the consequence, especially when it upsets those you care about.