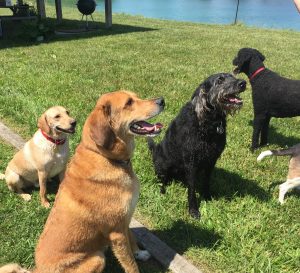 If you have never been to a dog birthday party, then you don’t know what you’re missing. The place where Doc and I work planned the best doggie extravaganza I have ever attended. And to think it was to honor my upcoming birthday. To tell you the truth, I became a bit verkclempted when I saw all my doggie friends and co-workers.

This place had it all, acres to run with my friends and a big pond to swim in. It was dog heaven.

A few of my old dog friends Eddie and Cash showed up and I met some new dogs as well. I got tickled by a younger dog named Chase. You know how there’s always that one dog at the party that’s a little out of hand? Well that was Chase. Half way through the party he got stuck in the paddle boat by himself and couldn’t get back to shore, but he let out a bark and we all went to his rescue. I have to hand it to the little guy, he was quite content to chase butterflies through the fields alone. He’s a dog that is easily entertained, an asset really.

My favorite part of the day was the nice Birthday treats my friends brought me. I was happy to share and even confiscated a donut from the box on the picnic table that was calling my name.

As the time drew near to leave, the humans attempted to get us together to pose for pictures by luring us with goodies. It was actually quite comical as they tried in vain to organize us together. If they would have asked we could have told them that was a bad idea as we all tried to get to the treats at once.

All and all it was a great day for this dog. Just a thought for you uptight humans out there….anytime you have a chance to go out and get wet and muddy with your friends go for it, it is pure nirvana.