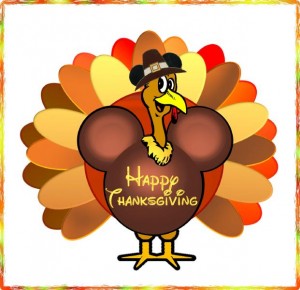 Doc has been cooking up a storm since early this morning in preparation for Thanksgiving dinner tomorrow. As usual I wait patiently for Doc to drop something on the kitchen floor that I can nibble on to keep up my strength. As she cooks, we laugh about last year’s Thanksgiving when she dropped the turkey on the kitchen floor, then cooked it and let her family eat it without saying a word. Here’s hoping that doesn’t happen again this year.

Since it’s almost Thanksgiving, Doc and I started talking about what we are thankful for. I think it’s easy to get in a rut sometimes and start complaining about everything that is wrong in your life.

Doc says when the Pilgrims came to the new world, they were trying to start fresh for themselves in a new land and faced many hardships along the way, yet they created a day to be thankful. Can you imagine if they came forward in time like the “Back to the Future” movie and instead of the DeLorean, landed the Mayflower in the United States in 2015? After the initial shock, they would probably have a hard time believing that you could go to the store and buy your turkey rather than hunting for it, then place it in an oven to cook it in a house with all of our modern conveniences. The Pilgrims would be taken aback if they heard any of us complaining. Even most dogs in 2015 live a better life than those Pilgrims did.

Well, we’ve come a long journey since the Mayflower landed and we’re still trying to work things out in America, but as a dog, I have hope for the future. I will spend tomorrow with family and remember to be thankful for the piece of turkey that Aunt Pat will sneak me under the table when she thinks Doc isn’t looking.

To you and yours, Doc and I wish you many blessings and a Happy Thanksgiving!