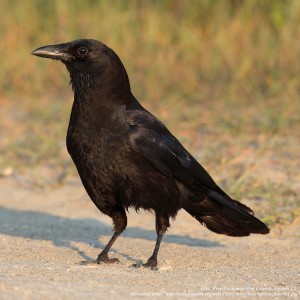 Doc just read me a story written by Katy Sewall about a little eight year old girl in Seattle that has made friends with the crows in her garden. It is fairly common for people to take care of the birds in their yards by filling birdbaths with fresh water and putting food in the birdfeeder. I have even seen Doc put out seeds this cold winter for the birds in our back yard, but it’s rare if the birds begin to show affection by reciprocating. In the case of this little girl, the birds began bringing her gifts.

As the story goes, the whole thing started accidently when the little girl was only four. She would drop food from her lap as she was getting out of the car and the crows would come over and get it. As all animals do, they learn quickly who and where the food sources are. Even I know who has treats for me at work.

As the little girl got older, she started to reward their attention by sharing some of her school lunches with them or giving them some peanuts or dog food on a daily basis. The crows got use to the routine and would call loudly when they would see her. It wasn’t long after the routine started that shiny gifts started showing up on the tray of the bird feeder; a polished rock, an earring, or any tiny object that would fit in the crows mouth. The little girl now has a storage container filled with all the treasured items the crows have brought her.

John Marzluff, a professor of wildlife sciences at the University of Washington found that crows and people can form a very personal relationship. ” There’s definitely a two-way communication going on there,” Marzluff says. ‘They understand each other’s signals.”

I agree with the professor, as I too have a personel relationhip with the crows in Doc’s yard and we understand each other’s signals.  For example, I hear the crows outside cawing, I go outside, they see me, call out a warning to the other crows and then I chase them until they fly away. This has happened every day since I was old enough to run after them, but the only present they have ever left me is trying to poop on my head as they make their escape. Not the kind of gift you really want, but it’s our routine and we’re sticking to it. Not every relationship in life is always going to be lovey dovey.