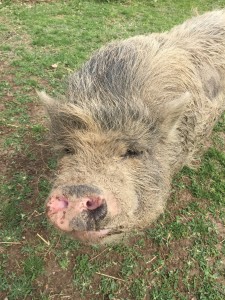 Would you find it strange if I admitted that I have developed a crush on a cute pot-bellied pig named Cupcake? I hesitated to make it public because some of my dog friends said the whole thing was weird and that I should stick to my own species. Whatever. Sometimes when you meet the girl of your dreams, she has a pink snout and a curly- cue tail.

One day Doc and I went out to the farm to check out some horses. Doc had the idea that some of the patients she works with might find it calming to be able to work with the horses in addition to working with me. I thought it was a grand idea and came along to be supportive. After meeting a good-looking steed named Sirius, we were told to walk through the stall and out into the paddock if we wanted to meet the resident pig. Pig! I almost said out loud, what’s a pig? And there she was, sleeping in the wet mud, making little grunting pig sounds. When she looked up and saw that a dog was in her sty, she let out a squeal that about broke my ear drums. But as soon as I looked into those little brown eyes I was smitten. We looked each other up and down, sniffed each other and I suddenly found myself joining Cupcake in a roll in the cold gooey mud. It was heaven. To my surprise I vowed my love to her and told her I would return soon. I even posted a picture of the two of us on Facebook to show we were a couple.

After Doc hosed the mud off of me and we started driving home I asked her, “Is it possible for a dog to love a pig?” Doc was still for a moment and then she said, ” Grover, love will show up when your heart is open. It doesn’t matter if it’s a pig, a goat or a beautiful Golden Retriever. If you love a pig that’s fine with me, but just remember one thing, if you date a pig, it probably wouldn’t be right for you to eat bacon any more.” No Bacon!, I screamed, that’s it, hand me the phone, I am breaking up with Cupcake right now. And that was the end of my romance with a pig.