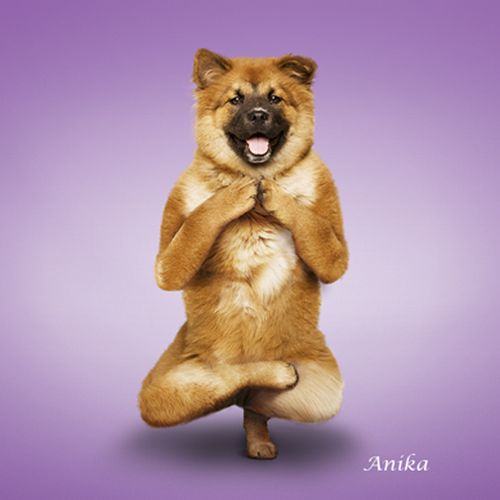 There is a new exercise craze invented by humans because they can charge for it. It’s called doga. The only reason I am excited about this, is because I can do it with Doc. Now, let me back up a little and explain.

One of Doc’s New Year’s resolutions was to do more exercises that will keep her flexible in her old age. (She is ancient in dog years). So one day, she turned on the TV and there was a man that is called the yoga instructor. He is sitting on the beach overlooking the ocean and you can hear the waves crashing in the background. Dressed in black tights and a tank top, his legs are folded like a pretzel. He speaks in a very soft and soothing voice, telling the humans to take a deep, cleansing breath in and then slowly exhale while clearing their mind. What the heck? I don’t mean to judge, but that man would never be voted the Alpha in any dog pack I know.

Anyhow, the instructor then starts demonstrating different ways to bend your body. One is even called the downward dog. I have to hand it to Doc, she tries her hardest to do all the poses, but her poor old  stiff body just won’t bend that way any more. At one point I become concerned when she is lying flat on her back with her eyes closed. She is sweating and taking very deep breathes. Thinking she has passed out, I lick her face trying to revive her. Her eyes pop open and she tells me to go away. That hurts my feelings and right away Doc feels bad and comes over to comfort me.

Leave it to Doc,  a few days pass and she comes home one evening all excited. She  tells me about a class called doga where dogs and humans do yoga together. She has paid for the class and we are signed up to start next week. You gotta love human ingenuity, create it and they will come. Rock on yoga man!