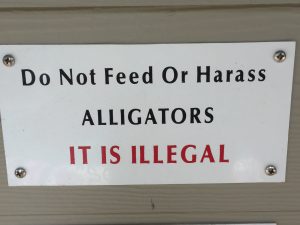 Doc and I decided to head down south for a break from our regular lives and the cold in Ohio. Being from the north I learned quickly that I need to be alert when traveling to a different part of the country as there are things down here that can actually eat me.

This was never more apparent when during an early morning walk we came upon a sign placed by a seemingly tranquil body of fresh water that said; “Do Not Feed Or Harass Alligators IT IS ILLEGAL” Now I have never seen an alligator in person, but I have seen them on TV and I can’t imagine that anyone needs told not to feed or harass them, but apparently they do.

Asking to end our walk early so I didn’t become a gator snack I had to ask Doc how someone might harass an alligator. “Well, she said, harassment can take on many forms.” ” Like how?” I asked. ” In general, you could scream at the gator, try to intimidate it, torment it, or try to pressure it in to doing something it doesn’t want to do.”  ” Like telling the gator his mama’s scaly and ugly and then jumping on his back?” I asked. ” Something like that, she laughed.”  “Sadly the same people who harass animals, often do the same things to people” she remarked. ” Well maybe everyone should just respect both humans and wildlife” I responded.

After we got back to the condo I ask Doc if she would help me drawn a new sign. ” What do you want it to say Grover?” she asked with a puzzled look on her face.  I then told her to write;  Do Not Harass Wildlife or Humans. ” A big smile came over her face as she said, ” Now those are words to live by.”