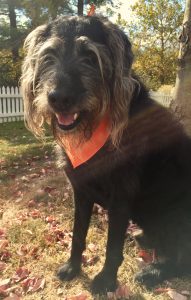 Doc said she couldn’t believe another week had already gone by and I agree. We work hard and play hard so the time seems to fly by, but I don’t think we would want it any other way. So let me get you up to speed on everything that’s happened since last week.

The day after the Debating Democrats left Otterbein University we thought all the media had gone with them, but we were wrong. Doc and I stopped at the farmers market in Uptown to get some potatoes for dinner and spotted a big ABC truck with a satellite attached. Not far from the truck was a camera man and reporter getting ready to go live. Doc remarked to one of the farmers that she hoped this doesn’t become a permanent thing or we will all have to travel with our own glam squads to be camera ready like those reality TV stars on the BRAVO network.

Because I know you all want an update on the little kitty we found, I am happy and relieved to report that he is doing fine in his new home. He is gaining weigh, acting frisky and very loved. 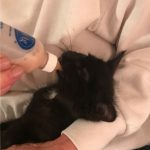 Since it’s getting close to Halloween, Doc and I decided to take her niece and nephew to the Ohio Village for their All Hallows Eve celebration. They depict how Halloween was celebrated in the 1800’s in Ohio and there are actors in period costume that tell the stories of characters that lived during that time.

In the first house we came upon a widow in her parlor with some friends mourning the recent death of her 25th husband. Yes I said #25! His body was laying right there in the coffin next to her. Her story, if you believe it, is that she and her husband were out for a nice Sunday drive. He got out of the carriage because he wanted to see if something was in the road when the carriage suddenly lunged forward and ran over him.  She hadn’t even buried the poor man and was already scanning the room for husband # 26.

Next we stopped to get a bite to eat at the food wagon. Because there were no tables around, Doc had us plop down to eat on the grass right in the middle of the cemetery. Kind of creepy if you ask me, but it was quiet. While we were eating we watched them dig a grave that we assume was for husband #25.

After supper we went to the local Undertaker as they were advertising for professional mourners to be part of the funeral procession for the widow’s husband. Doc is a good fake crier and got hired right away. Her niece was kind of freaked out by it all (she’s only 8) and decided to stay outside. All in all we had a really good time and when we got home we went right to bed because we were ready to meet the Sandman.

Sunday was a beautiful fall day so Doc worked in the yard. She kind of made me nervous when she got out the ladder to climb up and change the flood lights on the back of the house. She said not to worry, if she fell all the neighbors were out and someone would eventually see her lying there and come to see if she was still alive. I didn’t think that was a bit funny.

So now we are back to work and ready to see what will happen next. What are you willing to embrace in life to create new adventures for yourself?