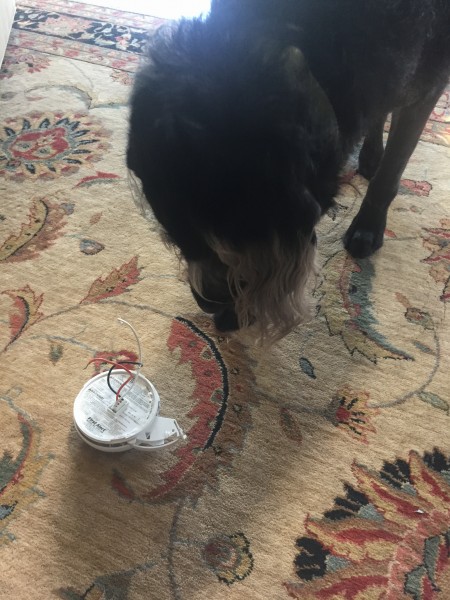 We first noticed the chirping sounds as soon as we got home from work. Doc, all too familiar with the noise, knew one of the batteries in the smoke alarm needed changed. Since Doc had to eat a quick lunch, change her clothes and dash to a meeting, she needed to put off fixing it until she got home. What she didn’t realize is that she had made a very poor decision.

Left alone at home with the obnoxious noise, I got under the bed and covered my ears. At about 8 pm, the back door opened. After changing her clothes, Doc put a fresh battery in her pocket, got the ladder from the garage and carried it to the room where the smoke alarm was making the noise. Swiftly she climbed the ladder, changed the battery and closed the opening to the smoke alarm. As she put her foot on the last rung of the ladder the chirping sounded again. Back up the ladder she went, trying to fix it off and on for at least 20 minutes until she decided there was nothing more she could do. She couldn’t just remove the battery to make it stop because the alarms are electrically wired through out the house so you can’t stop the noise unless you detach the wires. Thinking that the battery might be bad, and given that she had no more of them, she decided to wait until the next day. Bad idea. She shut the door to the room, came downstairs and after about an hour we went to bed.

As the house became quiet, all you could hear through out the night was that darn ” chirp, chirp, chirp” off in the distance every 15 minutes through out the entire night. Needless to say, neither of us got any sleep and we drug through our work the next day as best we could. On the way home we stopped and bought fresh batteries.

Once again after getting home, Doc climbed back up the ladder and put in the fresh battery. Surely the problem was now solved and we would have peace and quiet again. Nope, not a chance, “chirp, chirp, chirp,” it sounded once again. Well you should have seen the look on Doc’s face, it was a cross between exasperation and fury. ” Please make it stop!”, she yelled. I was right there with her until she started talking about getting a gun and shooting the darn thing.

Knowing it was time for an intervention, I texted her nephew that happens to be an electrician and typed the following, ” Please come help us! The smoke alarm won’t stop chirping. We are sleep deprived and not thinking clearly. Doc has done everything she can think of and is now threatening to kill it with a weapon.” Luckily her nephew was close by finishing up a job and came right over. Quickly he disconnected it, removed the wires and said that the whole smoke alarm was bad and needed replaced.

In an instance, a wave of calm and normalcy returned to the house. I did learn one important thing from the whole adventure. If I ever need to get any top-secret information from Doc, all I need to do is lock her in a room with a chirping smoke alarm and she will give up the farm.