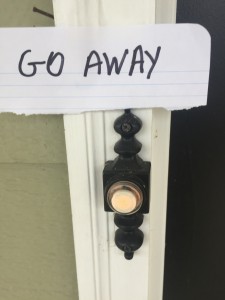 Most of the time Doc has a lot of patient’s with other people’s behavior. In other words, it takes a lot to get her riled up. When we come home after a hard days work, the last thing we want is to be bothered by a salesman. Especially the salespeople that try to frighten you into buying their products by telling you all the terrible things that will happen if you don’t buy bug killers, burglar alarms or gutter repairs at their one-time special offer. It’s enough to give you nightmares. But that is what happened on a semi-regular basis at our house until the day Doc reached her limit and put a end to it.

It felt like we had tried everything. I  would bark and growl when they rang the doorbell, but that didn’t deter them until Doc opened the door and they saw how big I was. We tried ignoring them by not answering the door and staying out of sight, but they would just stand there and continue ringing the bell. One time we had to crawl under the window on our bellies like we were hiding from the Feds, so that the man at the door couldn’t look in and see us. It just doesn’t seem right that the simple ring of your own doorbell should put you into a state of panic.

We thought we would have to go on living in fear forever until one day, while Doc was perusing social media she came across a sign that someone else had posted. Doc wasted no time. She went to the garage, found an old piece of plywood and some left over paint and created her masterpiece with a few modifications. As soon as the sign dried, she posted it on the front porch admiring it like it was a work of Shakespeare for goodness sakes. I eagerly came with her to check out what it said.  In bold red letters she had written;

We Don’t Have Any Money Left To Buy Anything

We Have Already Decided Who We are Voting For

We Have Already Found Jesus

Unless You Are a Neighborhood Kid Selling Candy, or Girl Scout Cookies, Go Away!

It worked. Months went by and nobody rang the bell. Slowly we lost our fear and even became excited when the doorbell rang because it was going to be someone we wanted to see. We now live in peace. It just goes to show you, that if you think hard enough there is a solution to every problem.