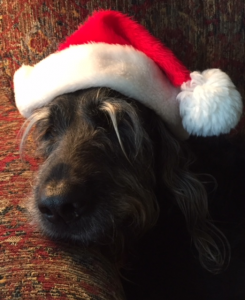 The chaos started in the wee hours of Sunday morning while I was nestled all snug in the bed, while visions of dog treats danced in my head.  When suddenly from the bed there arose such a clatter that I sprang to my paws to see what was the matter. When what to my wondering eyes should appear? Well, it wasn’t Santa and his eight tiny reindeer. It was Doc and she was obviously in distress.

I watched with concern as she scratched furiously all over her skin like she wanted to pull it off. “Did she have fleas?” I thought to myself. Poor thing. After she turned the bedside light on even I could see the red bumpy rash in blotches on her skin. “Uh oh, I said out loud, what are you gonna do about that at two in the morning.”  “Pray that there is some allergy medicine somewhere in the cupboard” she moaned. Luckily there was some left over and after taking it she finally got some relief and we both went back to sleep.

I slept so late the sun was up  when I awoke the next morning. As I opened one eye there was Doc sitting on the side of the bed scratching again.  Since it was Sunday, she couldn’t see a doctor unless she went to the hospital or Urgent Care, so for the rest of the day Doc sucked it up and stayed busy. She was was not the most pleasant person to be around so I avoided her like she had the plague. I know you are thinking I should have been more understanding but with COVID, not being able to work or see everyone we love, I was starting to get worried that something was really wrong with her. What if we had to cancel Christmas?

Early Monday morning she called the doctors office and talked to a nice nurse who told her to come in that afternoon but warned if symptoms got worse to got to the ER. Now I was scared. I sat right next to the desk all morning while she worked making sure she was ok until it was time for her appointment.

After she left, I waited anxiously by the front window so I could see when she drove in the driveway. Meeting her at the door I gazed up at her as she said ” I had an allergic reaction to some medication that they gave me, but everything will be ok.”  Hearing that I sighed with relief.

They gave her some steroids  to stop the hives and the itching. They not only worked but let me  tell you those steroids must be some kind of miracle drug. Doc has been zipping around all this week with the energy of a teenager.

Last night after dinner Doc told me she had a special surprise. She took me outside and told me to look into the South- Western sky. I looked toward the heavens and saw the brightest star I had ever seen in the night sky. Doc told me that some call it the Christmas star and that it has not been seen in 800 years. It had been too cloudy for us to see it on the Solstice, but it was still magnificent! As we stood there together in silence gazing in wonder at the vast universe, it really put everything into perspective. I was once again hopeful that everything would be ok and that the star was sign of hope for the new year. We could all use a little hope about now.

May you and your family have very blessed Holiday season!