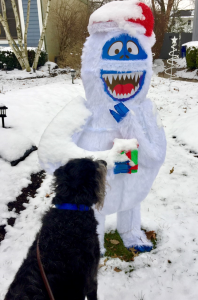 As you recall, last week Doc got into a brief tiff with our Christmas tree. I don’t know what magical change has come over her since that incident, but she has been nothing but chill all this week. It’s as if  she were worried that our Elf on the Shelf would share her evil behavior with Santa if she didn’t shape up. However she resolved her stress, this therapy dog is thrilled. So we are back to our normal routine, but nothing is normal about some of the things that people are passing off as Christmas decorations in our neighborhood and frankly some of them scare me.

We follow almost the same route every day when we take our daily walk. From January until August people’s yards have normal things in them like, tress and bushes. However come fall, strange football mascots that reach 7′ high pop up randomly in people’s yards. I have learned to deal with them, but then comes Halloween and creepy things hang from trees. I won’t lie, it freaks me out. Recently one neighbor took it to a new level with a 5′ Abominable Snow Man in the yard near the sidewalk. Doc had to explain what it was. I don’t know if these things are real or not because they move with the wind and after dark the beasts big teeth light up. I have been keeping my distance and growling at it for weeks to let it know who the boss of the neighborhood is, but yesterday Doc told me it was time to confront my fears.

My advice to you is never live with a therapist. Now don’t get me wrong, I love Doc and she is good to me, but I really could go the rest of my life without confronting the Abominable Snowman. I mean really, what’s the point? What if we go over to it and it springs to life like Frosty the Snowman, then what? But Doc wouldn’t listen and told me she had my back. I walked straight up to that snowman like I owned him and growled a little just for good measure. And you know what, he just stood stone straight staring at me and didn’t utter a word.  He could really work on his social skills.

So Doc was right after all. I guess most fears are concocted in our heads. Today I will just walk on by without even giving him a second glance. I would really like to lift my leg and pee on him for good measure, but that wouldn’t be very neighborly.