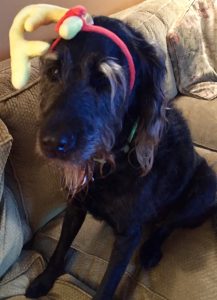 Did I remember to tell you that Doc started her Christmas shopping well before Thanksgiving? These days Doc hates waiting for Black Friday. She went one time with her niece Jennifer and she swore she would never do that again. I am glad, because after you hear what happened you will know why I hate Black Friday too.

About four years ago after Thanksgiving dinner Jennifer and Doc decided to shop the next day thinking it would be fun. They planned ahead by plotting their route based on the best prices they found in circulars and on-line.  I watched from afar, amused by how much time and energy humans will exert to buy more stuff. If I can’t eat it, sleep on it, or sniff it, I have no use for it.

Early the next morning Jennifer arrived at Doc’s with an extra-large coffee in hand, caffeined up and ready to go. Both of them in running shoes and athletic wear, they were dressed for battle. They looked so intense, I decided to stay out-of-the-way until they left.

Their first stop was Wal-Mart. Jennifer instructed Doc to get a cart and lead the way to the toy department.  She told Doc in a firm voice, ” Don’t make eye contact with anyone, they’ll take it for weakness and swoop in and grab what we want.” Steely eyed and focused, Doc used her 5’9″ frame to look over the crowd. The pushing, positioning and blocking between shoppers would give the Ohio State Buckeye defensive line a run for their money. Apparently there’s nothing more important to humans on Black Friday than scoring the hottest gift at a discount.

After spending hours in crowds of people, standing in lines and spending gobs of money, they finally made it home. I heard them stumble in the door and they were carrying bags and bags of stuff. They both fell back onto the couch exhausted, swearing they would never do that again.

Reaching inside one of the bags , Doc excitedly pulled something out. ” I got you an early Christmas gift.” As I approached I saw a pair of reindeer antlers. “What are those for?” I asked like I didn’t know. And with one swift move they were on top of my head. I tried to look pleased, but all I could think about was how humiliated I would feel when Doc put the picture she took of me in those stupid antlers on Facebook. So now you know how I came to despise Black Friday without ever putting one paw inside of a store.