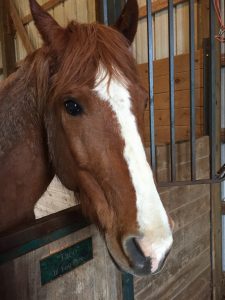 It’s turning fall in the midwest so Doc thought it was a good time of year to take a group of patient’s back out to the horse farm. As you recall Doc has been using equine assisted therapy to help patient’s  enhance their emotional growth. The work we do at the farm with the horses acts a metaphor for what is going on in the person’s life and today was quite an awakening for most of the group members.

From this dog’s perspective, humans spend too much time listening to what others have to say, forgetting that it’s the behavior that always tells the real truth. Ignoring people’s behavior gets some of you in big trouble. Knowing that can be a problem for many, we worked on a exercise that would bring that to light.

First they had to pay attention to the horses body language as they approached their space. We often forget that non-verbal communication counts for about 93% in humans because you all love to hear each other talk. Since the only way animals communicate is non-verbally the group had to learn and then pay attention to their language.

All was going well with he exercise until one of the big draft horses that is still growing at age 2 decided to approach Doc when she wasn’t looking and attempted to pull the watch right off of Doc’s wrist. It was a battle of non-verbals when Doc pushed the horses head away and then that big 1800 pound baby reacted by trying to bite the toe of Doc’s boot. No harm, just a youngster trying to test the boundaries.

So at the end of the day what did everybody learn? When they respected the horses body language and their space, the horses were calmer and more willing to engage. We talked about the importance of respect as part of the communication process whether it is horse, dog or human. It’ s easy to forget sometimes especially if we are intent to get what we want or are trying to get our point across.