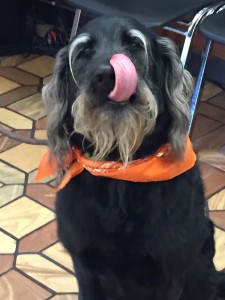 There is no doubt that I am a different looking kind of dog. With my bushy eyebrows, beard and long curls hanging from my floppy ears, I get many second looks from the humans I encounter. Some question Doc about my breed and age as they try to pigeon-hole me into a category they understand. Most humans are complimentary and say nice things about me, but there are others that tell Doc that I am the ugliest dog they have ever seen. They assume that because I’m a dog that I don’t understand or sense the negativity in their voices. Sometimes it hurts my feelings, but Doc reminds me not to let other people’s negative opinions get to me, because that is all that they are, opinions.

Because of those encounters, I have become more sensitive when I hear humans make judgments about each other. From my experience, human beings can get pretty ugly with each other in a multitude of ways. The worst things I see show up on social media. I guess people feel safe saying whatever they think when they are anonymous. They would never say those same things to someone face to face, or at least I hope not.

It’s different for dogs. We strike out physically when we’re afraid. It’s a way to protect ourselves and those that we love.  It’s pure survival instinct to deal with the situation and then move on. I have never lashed out or snubbed another dog because I looked down on them for being a mutt or having a past as a shelter dog where they were given food and housing for free. It makes me wonder where all the judgement comes from. I guess you humans are afraid of what you don’t know and protect yourselves by assigning a label or a judgement instead.

The beauty of being a therapy dog, is that I get to love people unconditionally every day. I don’t care where you came from, what you did in the past, how much money you make or who you voted for in the last presidential election. There is a real sense of freedom that comes with that approach.

Doc told me that many years ago a very wise professor she had in college told her that labels belong on cans not on people. I think that was a very profound thing to say. Maybe we would all be better off if we tried to get to know each other before coming to any conclusions.