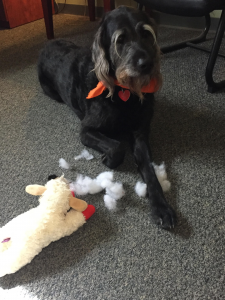 There are occasions that Doc and I work a 10 hour day. Now don’t get me wrong, she makes sure I am well taken care of during those long days, but come on, it gets a little boring at some point. It is in the height of that boredom that I find things to entertain myself and not all of them are Doc approved.

Recently she resurrected one of my stuffed toys named Lamb Chop from puppy hood that she found buried in the deep dark bowels of her desk. Unbeknownst to me she had buried it there some four years ago after an alarming incident where I had ripped Lamb Chops eye off and ate it. (I had to do something the thing just kept staring at me, it was creepy). I guess she felt that I had finally reached a point of maturity and that I could be trusted again. To tell you the truth, at first it was comforting to see the little lamb and I immediately felt that warm and fuzzy feeling of comfort from my childhood.

So today, while Doc was talking to one of the patients, she placed Lamb Chop on the floor and I immediately pulled her close to me and licked her fuzzy body with affection. From Doc’s perspective the reunion between lamb and dog was going fine. Or so she thought. Just when Doc was feeling comfortable about letting me play with Ms. Chop again, the unthinkable happened.

There was a meeting down the hall and Doc left me alone with Lamb Chop. Everything was going fine until I glanced over and noticed that the one eye that was still left on the beast was staring at me. I waited patiently for Doc to return ( at least 7 minutes)  until I just couldn’t take it any more and took matters into my own hands.

I surmised that I could strategically begin dismantling it through the hole of the eye that was already missing. I thought Doc wouldn’t even notice if I pulled out a tiny piece of stuffing. I could easily hide that under my paw if I heard Doc coming down the hall. But isn’t that how all bad behaviors begin? You tell yourself it’s just this little thing, just this one time.

Well you guessed it, I just couldn’t stop myself and in the middle of dismantling poor Lamb Chop, Doc opened the door, looked down and caught me red-handed. She started shaking her head back and forth saying “Oh Grover.” Well that alerted all the staff who came running down to see what was going on. Surprisingly they took one look and burst out laughing. I guess I did look kind of funny laying there surrounded by stuffing with that sheepish look on my face.

The biggest surprise came when Doc apologized to me. “Grover, I am so sorry that I put you in a situation that you were not ready to handle all by yourself.” And with that she picked up Lamb Chop, shoved the stuffing back in the eye hole and placed it back in the dark corners of her desk, probably never to be seen by this therapy dog again.