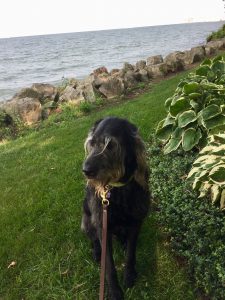 Recently Doc and I took a trip to the lake for a few days to rest and reflect. Last year was my first trip to Lake Erie and when Doc took me down to the water’s edge I became frightened by how much water there was, the noise of the waves hitting the rocks and all the birds flying so close as they were diving for fish. But after a day of being around the water and with Doc’s encouragement, I started to like it and even put my paws in the water as we walked along the beach.  As I looked out over the water today I started to think about all I would have missed if I would have let my fear keep me from having a new experience that I now love. So my question to you my gentile readers is this; How is fear holding you back from living your life to the fullest?

It’s easy to get trapped doing the same old thing every day because it feels familiar and safe, even when you wish you had the courage to do something different. Staying stuck in fear keeps us walled off from all the possibilities of living a life to the fullest. Sometimes you just have to move forward even if you are afraid. Doc often tells me that after she has done something that she was afraid of that she finds it was never as bad as she had conjured up in her mind.  She’s right and personally I would rather face whatever I am afraid of than get to the end of my life and have regrets over what could have been. I think the lyrics to the song Already Gone by the Eagles says it the best; “So often time it happens that we live our lives in chains and we never even know we have the key.”