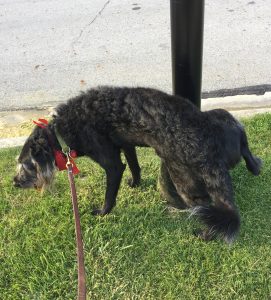 When Doc and I are out and about on our evening walks, I like to leave little messages along the route. This is most often accomplished by lifting my leg and leaving what I refer to as “Pee- Mail” on a tree, pole or the typical fire hydrant. This allows any mammal that comes along to read my message and leave their own response if they choose to. Human’s refer to this as dogs marking their territory, but I can testify to the fact that dogs ain’t the only ones.

People like to mark their territory as well, in a million subtle and not so subtle ways. It starts when they are small after they learn the word “mine” and then it escalates from there. Before you know it they have grown into adults that think battling for the arm rest in the movie theatre or saving seats with coats is akin to planting their flag on new territory they have discovered. But nothing compares to how Doc marked her territory the other night.

She usually goes gaga over the deer that come through our yard. She especially oohs and ahs when there are fawns with a mother doe. That is until recently. She had planted hostas in the spring, watering and fertilizing them until she ended up with big beautiful plants. The first time she noticed her plants had been nibbled on was a few weeks ago. The next day half of the leaves were missing. She caught the deer red-handed one morning when she let me out the back door. I bravely chased the big thing out of the yard, but I can’t be on guard all the time because I am busy meeting my obligations as a big celebrity therapy dog. After telling Doc we needed a plan B all she said in a low whisper “Coyote urine.” “What !” I thought to myself. How on earth was she going to get those coyotes I have seen down the road to pee in a cup?

Let me tell you, Doc never disappoints. She left the house for a while and came home with the most vile smelling liquid I have ever encountered. And you guessed it, the label read 100% Coyote Urine from a company called Predator Pee. The directions said to spread around the “pee-rimeter.” So spread we did.

The original problem is solved, no more deer, but now we have a new one. Not only do the deer stay away, but the odor is so putrid that the neighbors stay away as well. So much for marking your territory.