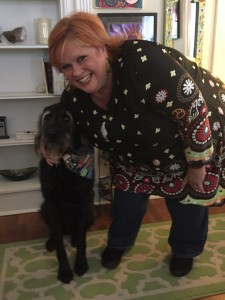 The most wonderful thing about the internet is that you never know who will read your blog and contact you. Last October, right before Halloween I wrote a blog about the Stoner House in Westerville, Ohio that was built in the late 1800’s. It not only acted as an Inn and spa, but was also a stop on the Underground Railroad. We talked about the Inn being haunted and I happened to mention that a business by the name of Mystic Nirvana is housed in the upstairs.

One day while checking my fan mail there was a message from a nice lady named Brenda that happens to be the owner of Mystic Nirvana. Miss Brenda is a Master Clairvoyant and Psychic Medium. She wrote Doc and me a nice message complimenting our blog and inviting us to come and visit if we would like to know more information about the Stoner House. We didn’t even think twice about the invitation and set up a date to go and visit.

As we entered the building and climbed the steps we were warmly greeted by Brenda who showed us into her office. As you know, I am a big dog and as I was sniffing the space, I almost knocked over Brenda’s glass orb right off of its stand. Luckily she removed it before I could do any damage. Doc was slightly horrified as I was not making the greatest first impression. Soon I settled down on a nice rug and listened while she and Doc talked.

As you know everyone has a story. I listened as Brenda told Doc about how in her college years she began to have some psychic experiences. Growing up in a home and a church that believed that anything termed psychic was part of the devil, she struggled with coming to terms with what she was experiencing. Over time she worked through her own doubts and fears and followed the path she felt drawn to. Her story made me think about how many times people don’t listen to their inner voice and make life choices based solely on pleasing others.

During the visit, Brenda shared some interesting photos taken on the back porch of Stoner House showing brilliant lights coming up from the area where the runaway slaves had been hidden. Brenda feels that the Inn continues to be haunted by spirits that have not crossed over.

After they were done talking, Brenda took us on a tour of the entire upstairs. She asked me to be on the look out for any spirits that might be present. I sensed nothing in the first few rooms and when we went into the kitchen I was mostly looking for food that might have dropped on the floor. Then she asked me to come down the hall and go into the bathroom. She said some people had felt some negative energy in there. I went in through the door and stopped right in my tracks. I am not going to tell you what I saw, but Doc knew I was scared because I put my tail between my legs, cowered and backed out that door and headed right for the steps to leave. Even Doc looked a little startled and said she would wait until she got home to use the bathroom. As there were some other people who had arrived to see Brenda, Doc and I thanked her for her time and left.

Some of you reading this may not believe in an after life or that people have the ability to connect with the other side. As for this dog, I believe anything is possible. I like to think that when the day comes that Doc and I are no longer together on this earth that we will meet again on the other side and continue our special loving bond. For me, that would be heaven.