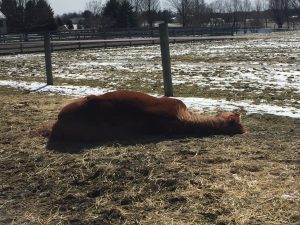 Although the snow had not entirely melted from the ground, it was a sunny day and the early signs of spring were beginning to emerge. As we came out of the horse arena we glanced over to see one of the mares sprawled out on the ground. Basking in the warmth of the sun, it was obvious she didn’t have a care in the world. I could tell by the look on Doc’s face that she was a little envious of the mare.  “What would it feel like to feel so free that you could enjoy every moment?” she said with a sigh to no one in particular. Hearing her say that made me realize that she felt more stress lately than I even realized.

Knowing it was time for an intervention I moseyed over next to her and leaned into her body in an attempt to comfort her. “Doc, you need to practice what you preach.” I said while tilting my head up so that I could see her face.” ” Easier said than done.” she replied. ” At that point I put on my own psychologist’s hat and said to her in a stern but loving voice. ” No excuses!”  A big smile spread across her face as she threw her head back and began to laugh. ” Are you mocking me?” You know that’s what I always say to others.” ” Just giving you a little bit of your own advice. ” I said with a smirk.’

Then she turned toward the field as if deep in thought.  When she looked back at me she looked happier, like a great burden had  been lifted. ” You are so right Grover, it’s easy to let duties, people and your own inner voice take you down anxiety road if you let it.  No more should have, would have, could have. Time to take my foot off the breaks and get going.”

Who would have guessed that a horse napping in the sun would be the wake-up call that Doc needed to move forward.