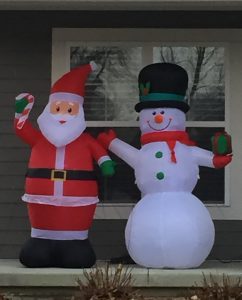 If you are like me, then you sometimes ask yourself why it’s so hard for everyone to get along with each other. We are often irritated by the most innocuous events but being a therapy dog I know it goes deeper than that. For example, let me tell you a story that I heard the other night that will show you just what I mean.

Last weekend, Doc and I were invited to a lovely party in a lovely home. It was a rather large soiree and although Doc knew the family for many years, we were not acquainted with most of the guests. No problem. Doc and I are comfortable meeting and talking to almost anyone. After speaking to the family and mingling with many of the guests by engaging in what humans call “small talk”, Doc and I decided to head out to the enclosed back porch for a while.

The patio was set up with tables and Doc and I decided to take a seat near the small band that was playing . It wasn’t long before a woman came over and introduced herself, erroneously thinking that we were by ourselves.  We tried to tell her that we came out to listen to the music but she insisted on sitting down so we wouldn’t be alone. Without missing a beat she began telling us about all the neighbors that had come and gone in the two decades she had lived on the street. Much to our surprise this included how many divorces per household, plastic surgeries that the “second and third spouses had” and a host of other assorted tales.

If that didn’t get our attention she then related a tale that was almost too wild to believe. Apparently there are rules that one must follow when living in the neighborhood and one of the new neighbors had broken one. They had committed the unforgivable sin of placing inflatable Snoopy Christmas decorations on the front lawn and then let them deflate and lay flat most of the time. “How tacky can you get?’ she remarked.  I immediately thought to myself ” What kind of sick neighborhood is anti-Snoopy?”

She related that this went on through out the entire holiday season and just when she was about to go over and discuss this with them something happened. One morning she let her dog out and heard him bark and howl in a way that made her run out to see what was going on. As she looked across the street there was a six point buck gouging Snoopy with his impressive rack until it was knocked down flat. “All this time it had been the buck she said, it just goes to show you that you never really know.” “Well imagine that!”  Doc remarked. Done with her story the woman flagged down someone she knew and bid us adieu.

” What do you suppose that was all about? ” I asked Doc.  “Well, she replied slowly, that was a perfect example of how it is easy to fall into the trap of assuming that we know about others, sadly humans often think the worst about a situation.”

I thought about what Doc said and was thankful to be a dog. Humans make their lives so complicated sometimes.