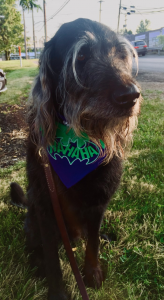 Wayne Dyer once said  “Conflict cannot survive without your participation.” No truer words have been spoken. Now let me tell you about some drama that Doc and I almost got pulled in to the middle of.

Of course the problem started with the humans and then we dogs being loyal to our masters felt the need to step forward and back them up. Some neighbors were arguing over goodness knows what as Doc and I were taking a walk down the street. The kids and the dogs were front and center all eyes and ears watching and learning how adults handle conflict. From my view it didn’t look like it was going very well. Lots of yelling and thankfully nothing physical, but no one was really listening to one another. As we got closer I looked up at Doc to see what she would do, ready to jump into action if needed. I noticed the arguing got louder after they saw us, trying to pull us into the fracas. I watched as she assessed the situation and then to my surprise she just kept walking. As I kept trying to strain my neck to see what was going on Doc looked down at me and said ” Mind your own bees-wax Grover, keep walking.”

Upset that she had corrected me, when we got further down the street I asked her why she didn’t intervene. ” After all, aren’t you the queen of conflict resolution?” I ask with a snarky tone in my voice.  ” Not every conflict is our conflict to resolve Grover” she said calmly as she went on to explain, ” If someone was being physically harmed or in danger I would have made a different decision, but that was their battle to figure out and resolve. Often the more people that get involved, the more a situation can escalate.”

And you know what? When we returned from our long walk two of the neighbors were talking things out calmly and the other one had walked away. The children and the dogs were back to playing with each other like nothing had happened.

Another important life lesson…sometimes it’s better to stay out of the drama and hopefully the parties involved will work toward a peaceful resolution, forgive, forget and move on without any help from me.