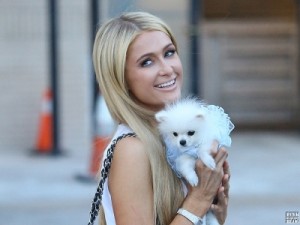 According to a very reliable gossip web site called TMZ, self-proclaimed celebrity and socialite Paris Hilton has just purchased two Pomeranians for $25,000. Apparently she bought them in Canada, kept one for herself and gave one to her mother. She is introducing her puppy to other rich socialites and celebrities as Princess Paris Jr.

As a dog born on a goat farm, I have never been exposed to puppies from what you humans see as high society or met a dog that is carried around in a designer bag. I decided to talk all this over with Doc, because the more I read about Princess Paris Jr., the more I could see that Doc was not treating me as well as I should be treated. To be honest, I was starting to get a little ticked off. While that dog is riding around in a limo, served gourmet meals, is carried everywhere and drinks Perrier water, I have to work as a therapy dog and write a blog, walk on my own four paws, eat plain old dog food and drink out of the toilet. That just didn’t seem fair to me. I am also asking Doc if she had to pay for me, as that tiny 12 ounce dog cost a little over $1,000 per ounce. I think Doc owes me an explanation.

One morning before work, I approached Doc about my grievances. She listened quietly, patted me on the head, opened the door to the garage and said ” time to go to work Prince Grover, get in the back of the car”.  I even thought I saw her rolling her eyes as I walked away, but I could be wrong. After I got into the car, Doc looked at me and said ” I love you Grover.” Then she threw me a generic Milk Bone that I gobbled down with pleasure. I guess it’s true what they say, family will keep you grounded.