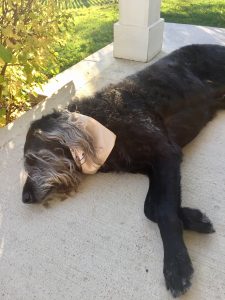 Doc told me not to stay up all night watching the election results, but I didn’t listen. She told me had a 6am patient in the morning and that we needed to be rested, but I ignored her and now I am paying the price.

I was already tired to the bone from playing with my buddies at doggie day care all day. We didn’t get home until after 4pm and after I took a nap, went outside for while and Doc fed me some supper, I asked to turn on the news. After all, they were saying this was the biggest election turn out in US history and I wanted to know what was going on. Now don’t get me wrong, Doc was interested. she told me she never misses an election because she votes in honor of her grandmother that did not win the right to vote until she was in her 30’s. But Doc wasn’t on the edge like I was. Heck I can’t even vote and I have been waiting for this day to get here so I could find out who would end up being the top dog in the White House.

At exactly 9pm, Doc turned the lights out and went to bed. She was sound asleep in about 10 minutes. I don’t know how she could be so calm while I was biting the nails on my paws I was so nervous. I laid on the couch in the family room and watched the TV so I would not disturb her. As I anxiously watched the colors of the map turn from red to blue and then back and forth again, I finally became blurry-eyed and fell asleep before I even new the outcome.

At exactly 5:30am this morning I was awakened by the sounds and smells of Doc brewing her morning coffee. She came in the family room, patted me on the head and said in a much too cherry voice, “Get up Grover, it is time to get ready to work.” Groggily I opened my eyes, lifted my head and asked “who won the presidency?” ” No one yet she said, they are still counting the votes. Now you’re exhausted because you didn’t go to bed on time.”

What a let down. Doc can be so annoying when she is right.