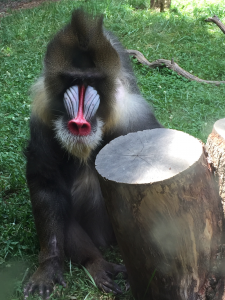 Doc’s favorite book when she was a little girl was “Put Me in the Zoo” by Robert Lopshire. Her family told me that she read it out loud over and over to everyone until they were sick of it. Since I think it’s important to judge things for yourself, I had Doc read it to me and I could see why she liked that book.

It tells the story of a big creature covered in spots. After visiting the zoo he decides that he would like to live there. When the poor fellow asks if he can stay, the zoo officials tell him no and throw him out. The creature is mad, but his friends ask him an important question, “Why should they put you in the zoo?’ The creature then goes on to show his friends all of the marvelous things he can do with his spots. In the end, his friends and the creature decide that the zoo is not the right place for him after all and he joins the circus where he lives happily ever after.

For a beginner book, it packs a big message about life. So many times we think we know where we belong, but once we get there it ends up being a bad fit. The problem is that some of us will stay because we invested so much time in getting there that we think we can’t change our minds or we remain out of a false sense of loyalty. That is a sure path to misery. Learning that it’s OK to go a different route is part of finding out where we are the happiest. No crime in that.

For example, it took Doc and I some time to find out what group of people I liked visiting the most as a therapy dog. Doc envisioned that it would be children. Although I like children, we found out that I am happiest doing therapy work with people who have addiction and mental health issues and cancer patients.

Always remember that if you keep your heart open you will find out where you really belong. There is a special place for everyone.