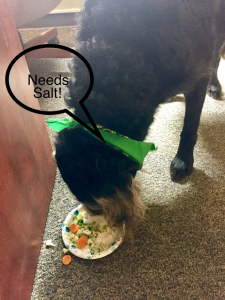 Many people think that New Years day is a time for new beginnings, but I think that spring is the time to take stock and start anew. Flowers are blooming, the grass is growing and bunnies are hopping down the trail. After a long dark winter, the spring temperatures and the sun motivates me to think about what I need to change in my life and the first thing that comes to mind is that I need to retrain some of the humans in my life as they have been slacking off in their duties. When I say slacking off I mean they are getting a little lazy when in comes to meeting my needs.

Why just the other day at work my co-worker Kim, that brings me a plate of steamed vegetables every day forgot to put that little dash of salt on them I like for added flavor. I complained by looking at her and whining until she understood and corrected the problem immediately. I don’t think that I should have to spend my time telling humans over and over what I like, so in order to save everyone time I have come up with a plan.

The vision came to me when I became exasperated with Doc because I have to remind her almost every day when my dinner time is. Really now, the woman is bright enough to tell time. So I came up with an idea that I think is probably the smartest idea ever. Why not just  open a school much like the one Doc took me to when I was a puppy to train me how to sit and stay? You know what I mean, basic obedience for humans where they learn certain commands. Of course only positive reinforcement will be used like earning more time to binge watch favorite shows or more screen time on Facebook or Instagram.

Thinking I was a genius, I told my puppy friend Norman that lives next door. I didn’t realize Doc was out working in the flower bed and over heard the whole thing and walked toward me. The look on her face was enough to scare a wild coyote away. Norman was wise enough to run back in into his yard and hide before the wrath came down on me. Doc summed it all up in one statement; ” Grover, you are one pampered pooch and you need to learn not only to appreciate all that you have but also all of the humans that love you. No one likes an ingrate.” And with that my goal of controlling the humans in my life vanished. As usual Doc was right so right then and there I vowed to be more appreciative.