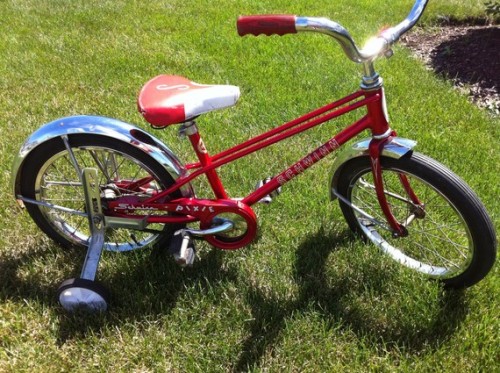 Doc recently told me a story about her childhood that really made me think about my own life and the fears that keep me stuck. I thought I would pass the story on to you.

When Doc was six years old, she got a shiny red Schwinn children’s bike for her birthday complete with training wheels. Doc was thrilled. She rode that bike up and down the long driveway at her house for hours every day.

A month went by and one day her father was out in the yard and noticed that she was balancing her bike without using the training wheels. He asked her to get off of the bike and bring it in to the garage. When he told Doc he was going to remove the training wheels, she began crying, begging and pleading with her father not to take them off because she was scared she would fall without them. “You aren’t even using them when you ride, he told her, it’s time to ride your bike without them.”

None of her continued pleading swayed him, so after they were removed, he had her get on the bike and start peddling while he ran behind her. With one swift push from behind, off Doc went, balancing perfectly. After the initial fear subsided, she had to admit that she felt proud of herself. As she rode back toward her father, he had a big grin on his face. and said,”I told you, you could do it.”

What a metaphor for life, I thought, as she finished the story. How many times do we keep our training wheels on long after we really need them just because it feels safer? Doc has always encouraged me to do things when I was afraid just like her father did with her. It’s so important not to let fear define your life.

So the question I leave you with today is; What would you do if you were not afraid? Maybe it’s time to remove your training wheels.