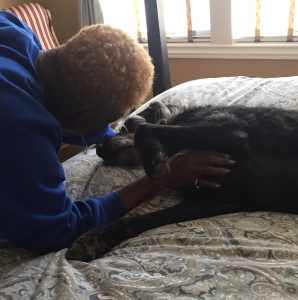 In everyone’s life there comes a time when we need to move on. It may be to pursue a better opportunity, to leave something negative behind or just to have a fresh start. Whatever the reason, sometimes when one person leaves there is another that is left behind and that is exactly what happened to me.

In March after Doc and I got back from our vacation, some of our co-workers had resigned to go to new jobs. One of the people who left happened to be someone that I was very attached to. Doc had tried to explain to me that Carolyn wouldn’t be working with us any more, but somehow it didn’t sink in until I saw her empty office. I just couldn’t fathom that she would leave me behind like that.  So every morning I would lay in the doorway of Doc’s office waiting for her to come through the back door and greet me like she had always done and every morning I was disappointed when she didn’t show up.

As the days went by disappointment turned into sadness. Doc took notice and began to worry. To add insult to injury, someone else moved into Carolyn’s old office. When I would go by I would saunter in, give the lady occupying the space the “stink eye” and then look under the desk just to make sure Carolyn wasn’t hiding there. Doc and everyone else tried their best to cheer me up but it was no use. Doc even told me that it is normal to feel sad when things change and others move on without us, but I didn’t care, I just wanted to see my friend.

One day after we got home from work, Doc took me outside to throw the tennis ball when suddenly she said ” wait here a minute Grover” and she went inside. I watched Doc through the glass sliding door as she let someone in. At first I couldn’t see who it was, but as she got closer I saw it was my Carolyn! As she opened the sliding door I was so happy I jumped up and down and then ran around the yard and the house. When we came inside I gave her big kisses and lay down on the couch beside her. She stayed for about two hours and when it was time to leave she told me not to worry because she would be back to see me.

As the front door closed I thanked Doc and told her how happy I was. ” I thought I was never going to see her again Doc, that’s why I was so sad.”  ” Oh Grover she said, I didn’t know that you thought that, no wonder you were so sad. Of course you will see Carolyn, she loves you and that will never change. She can come and visit any time she wants.”

Feeling content I realized I had learned something new…that even though someone you love may move on, it doesn’t mean that they have forgotten you in the process. True friends stay close in their hearts.