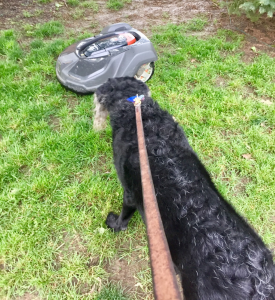 Franklin D. Roosevelt once said “The only thing to fear is fear itself.” Well I would bet you money that he wouldn’t have said that if he had to encounter all the strange objects in my neighborhood.  It can be a very scary place for both man or beast sometimes.

Now I admit that I don’t like change. If it ain’t broke why fix it? Just because something is new, you don’t need to run out and get it. As I dog I am happy doing the same thing day in and day out. I like the structure and the security of knowing what, when, where and how things are going to happen. As humans, you are constantly coming up with something new that you buy for no other darn reason than you think it will improve your life. But I digress.

The daily walk started out like any other. It was a beautiful spring day and I was having fun sniffing around and greeting the neighbors that were out working in their yards. At first it was the humming sound that got my attention, then the movement. I stopped right in my tracks and started growling and barking at the strange thing moving around on the front lawn. Doc hadn’t seen it yet and asked me what I was growling at. I pulled her cautiously toward the beast as it continued to move in circles like it was lost. I finally got the nerve to go up and sniff it to see if it smelled like anything I was familiar with. By this point I had gotten a few of the neighbor’s attention and they walked over to see what was going on. ” Oh, said neighbor #1, Grover, that’s a robotic lawn mower. It cuts the grass by itself, but don’t try to mess with it, it has a built-in alarm”. Who would want to mess with that I thought to myself, that thing is scary. If it can cut the lawn it could chop me up and spit me out. I tugged a little on the leash so Doc would know I wanted to leave. After we got a safe distance down the street I asked Doc if she was going to get one of those strange robot mowing beasts. ” Don’t worry about that Grover, those robots cost well over $2,200. That calmed me down, knowing how cheap Doc is.

Fear can be exhausting, so when we got back to the house I fell sound asleep. I soon started dreaming about that stupid robot coming down the street, getting into the house and chasing me around. I soon slayed it in my dream by grabbing the battery out with my teeth until it died in its tracks. I was feeling quite proud of myself when I work up. Noticing Doc had been sitting beside me I looked over to her and said, ” Change can be both scary or exciting sometimes.” “That’s true it can be, she responded, that’s why it’s always important to decide if you’re avoiding change because of fear or whether the change is a quick fix to try and make you feel better.” Well I pondered, those are words to live by.