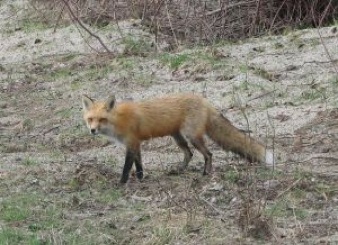 Sunday morning at 6am is way too early to deal with a predator in the yard, but as the dog of the house it’s my duty to protect.

I hated waking Doc up so early to let me out, but I really needed to pee because I drank too much water the night before. It is so peaceful at sunrise and I was sauntering around the yard listening to the birds when I saw a saw something moving out of the corner of my eye. There between the houses something that looked like a dog, but didn’t smell or act like a dog stopped and had the nerve to look me over like I was the intruder. I ran to the fence and let out the bark I use to signal when there is danger.

Doc came running out on the back porch in her PJ’s yelling at me to be quiet before I woke up the whole neighbor hood when she saw it too. “Fox”, she said under her breath.” I could tell by her body language that she thought something might be wrong with the thing, because it didn’t act scared of me or even move when Doc clapped her hands and yelled for it go away. That fox was not budging and spent the better part of 15 minutes lounging in the neighbor’s yard.

Doc called me inside because she was a afraid the fox might be sick, but then what did she do? She got her camera and went back outside alone! As she slowly approached the fox, he came closer to her. I held my breath in horror. Sometimes that woman has no sense at all. There I was watching from inside the house unable to protect her if the fox jumped on her. I sure didn’t want this to turn into an episode of When Animals Attack.

Thankfully, after she took her pictures she came back inside and we watched together as the fox slowly left the yard and went through a hole in the neighbors fence. Doc went back to bed like nothing had happened. As for myself, I was too excited to sleep and kept watch out the window to make sure the intruder didn’t return. I must have fallen asleep while on guard duty because I awoke to the sound of Doc’s voice telling me it was time for breakfast. After all that early morning excitement, it was nice to go back to being normal, but I will keep a watchful eye just in case that fox returns.