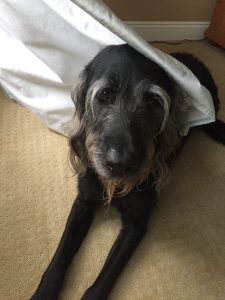 There is a famous scene from the iconic movie The Wizard of Oz  when Dorothy goes to the wizard for help and her dog Toto pulls back the curtain to expose the Wizard as a mere mortal. The Wizard tries to continue his facade and says ” Pay no attention to that man behind the curtain.”  Finally realizing the jig is up when confronted by Dorothy and her cohorts, he admits who he really is.

Sadly there are many fake wizards out in the world and they show up in places we would never expect them to be. And even when they are exposed for what and who they really are they continue with their ruse, trying to convince you that your judgment is wrong.  Some people refer to that as “gaslighting”. Beware, because if someone is convincing enough they can make you mistrust your own judgement. It is a powerful manipulative tool to sow the seeds of doubt, targeting an individual or a group hoping to get them to question their own perceptions.

Just the other day I spotted a dog sitting patiently at the base of a tree. He was trying to convince the cat that even though he chases her every time he gets a chance, that this time it would be different.  That today he would not chase her and that they would have a wonderful time together. The dog even had the nerve to tell her that all the times he chased her it was her fault because of the way she acted. I shook my head as I watched that dog slowly convince the cat (against her better judgement) to come down out of the tree. Well you can guess what happened next.

Doc often tells me its important to listen to my own instincts and will often quote Maya Angelou when she said, ” When someone shows you who they are believe them; the first time.”