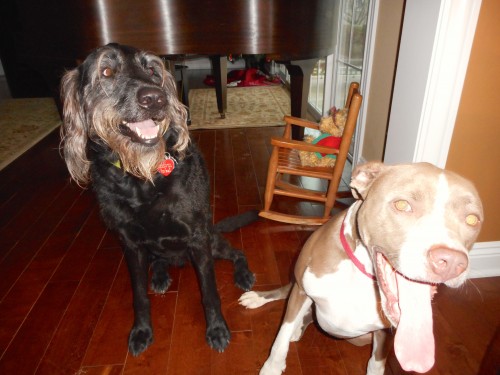 You would think that after years of observing Doc doing therapy, I would have developed a better sense of judgment when it comes to reading other’s intentions. But, just like you humans, I got caught up in my emotions, didn’t listen to my instincts and ran right toward disaster.

Her name was Vixen and that should have been my first warning. I was smitten from the moment I saw her. She sauntered in the front door of Doc’s house like she owned the place with her tail and nose high in the air.

Doc hadn’t told me that her niece was bringing an over night guest of the four-legged variety, so I was thrown off guard. Her beautiful legs and sleek fur were enhanced by a cute little face and ears that slightly turned down. It started out innocently enough by running and romping outside and soon she was letting me chew on her leg while she bit my neck.

We were together for three days and I used my best moves to win her over. Soon she submitted to my romantic ways and I knew she was mine. An added bonus was that since she was a Pit Bull, I knew she would give this designer dog some “street cred.” It was a perfect union and I was smitten.

Early one morning after breakfast, her humans began packing their suitcases and moving them out to the car. I saw them hug Doc and thank her for her hospitality. Then, they put the leash on Vixen’s collar and walk toward the front door. I could feel my heart pounding in panic. That Vixen walked out of the house and out of my life without even a goodbye or a glance back at me. I stood watching out the window, heartbroken as she drove away.

Doc looked at me with compassion, kissed me on top of the head and said “be careful about giving your heart away too fast Grover, it’s always better to take it slow. “Another life lesson learned; never trust a dog named Vixen from Michigan.