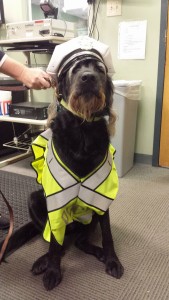 It’s easy to be lulled into the complacency of our daily routines. There is a certain comfort in predictability. You aren’t really prepared when something jolts you into a new reality, especially in the wee hours of the morning.

It started out just like every other day. Doc let me out at about 5:15 am just like she always does. As I was out in the yard doing my business, Doc was inside getting our breakfast ready before work. After awhile Doc came and opened the back door and called for me to come in. As I was meandering up the back steps I stopped right in my tracks when I heard a noise over by the fence.  I knew right away something wasn’t right so I turned around. I saw something moving so I immediately went into high alert growling and barking as I ran toward the fence. Doc couldn’t see what I was barking at because it was too dark, but I saw him. There was a man in the yard that didn’t belong there. As I shot through the dark toward the stranger the man became so frightened that he fell right into the weeds trying to get away from me. By this time Doc was aware that we had a trespasser on our hands.

I swear Doc doesn’t use the good sense she was born with sometimes. She stood on the back porch watching the man go through the back acre until he reached the street light where she could see him. Later she told me she wanted to get a good description and see where he was headed.Now most normal people would call the police at this point. Not Doc, she said we had to get to work. Luckily one of the  police officers we work with told her to go file a report. Duh!

After work we drove to the police station and met a nice officer that took our information. Of course I had to go along as I was the main eye-witness. The police asked me what I saw and then asked Doc what she saw. Then the police and the other staff gave me some good belly rubs.  One of the officers even asked Doc if he could take me home with him. Of course she told him no. It just so happened that a man fitting the description we gave them had been breaking into cars and had tried to break into woman’s garage that morning.

Later that day we got word that they saw him walking down the street and arrested him. Even though that man shouldn’t have been doing what he was doing we both hope he gets the help he needs.

Doc told me should couldn’t  have been prouder of me. I told her I was happy to protect her, after all we work as a team. Isn’t life is so much better when you know someone has your back?