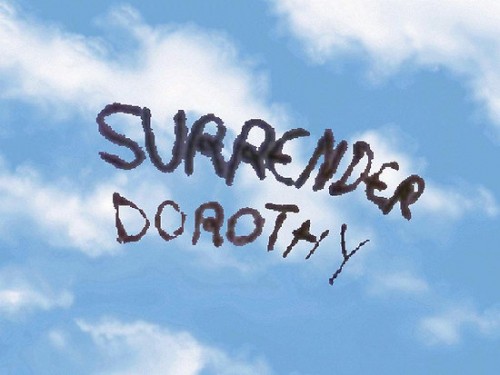 There may come a time when you need to banish all of the wicked witches and flying monkeys from your life. What does that mean you ask? Well let me tell you a story about learning to surrender to your truth, just like Dorothy did in The Wizard of Oz.

Being a therapy dog, I listen to many people talk about their lives. On this particular day, a patient had told Doc about a big life lesson they had recently learned. Since childhood, Doc’s patient had allowed herself to be forced into roles and pigeon- holed into being anything but her authentic self. “I didn’t even know who I really was anymore, I just did what people expected so they would like me.” she said.

That path of pleasing others eventually led down the dark road to addiction. Then the addiction led to being with people she didn’t like, participating in behaviors she didn’t really want to do and trying to cover it all up by being high, so she wouldn’t have to think about any of it. She was lost.

As often happens with addiction, life got really ugly. One day she just couldn’t stand the pain any more so she sought treatment. That’s where Doc and I came in. As part of the treatment team, it was Doc and my job to listen and help to guide her back to her true self again. It was tough for her at first, she struggled, sometimes she was resistant, but she stuck with it.

First she got rid of the people in her life that wanted her to stay sick, then she got on her feet and got a job, apartment and a car. As she gained confidence she learned to say no. It wasn’t always easy, in fact recovery can be painful at times and the witches and the flying monkeys from her past kept trying to lure her back into addiction. But, she was tough, stayed focused and slowly she started getting better.

One day last week she came in to see us and said. “I realized I was still trying to please others by letting people talk me in to doing jobs or favors I did not want to do.” So she quit the job she was not happy in and got a new one she likes. Then she started telling people “no” when she didn’t want to do something. “I realized that if they don’t like who I really am, than they are the one with the problem.”

I thought Doc was going to jump out of her chair she was so proud of what her patient had accomplished. As for myself, I went over and gave her a big lick across the face and thought to myself, “good for you, no more witches or flying monkeys. You finally understand that there’s no place like home.”