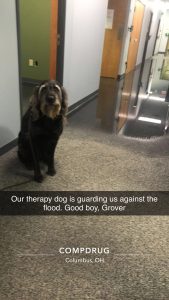 Most floods happen after water rises so high from a storm that it enters from the outside in. Well the flood we were in started on the inside and quickly moved to the outside because there was nowhere else for the water to go.

It was about 5:45am and Doc and I were already at work. Doc was getting her first cup of hot morning coffee to shake off the early morning chill and she was getting me a fresh bowl of water when we first heard the gushing sound. We both looked down the hall to see a pool of water slowly moving out onto the carpeted hallway. Doc thought a toilet might have overflowed but suddenly the gushing sound became louder and the water started flowing faster down the hall toward us. ” Holly cow!”  I exclaimed to Doc in an excited voice.” They finally took my suggestion to turn this building into an indoor pool!” ” You knucklehead, she retorted, we have a leak!” By this time the water was getting the attention of the other workers.  A pipe had broken below the shutoff valve and that is never a good thing.

Not to be deterred and after finding out the Fire Department was on the way, Doc grabbed her coffee and my water bowl and we went to higher ground.  It was way too early in the morning for Doc to face an emergency without her coffee.

After retrieving our first patient from the still dry lobby we had our first session while keeping the door cracked just enough so that I could lay and keep watch just in case there was a need to evacuate. It was rather exciting watching the firemen and the other buildings managers go by. By the end of the session, the water was starting to make its way down our hall so we had our patient safely exit out the back door.

Always the good Girl Scout, Doc whipped a pair of rain boots out of her file cabinet and we both went to see if we could help. Along the way we ran into the three nice firemen and I took some time to visit with them and then pose for pictures. It’s the least I could do for people who put their lives on the line for others. We then waded through water and went to the lobby to help patients until we could relocate everything in our other building across the street.

The bad news is that there is a lot of water damage to the building and we won’t be able to use it for a while. But the good news is that everyone worked hard so that our patients are still being served every day. The other good news is that since Doc and I don’t have a regular office space, I get to stay home this week and do things I am not supposed to do like sleep in Doc’s bed. Whoo hoo! I  am one lucky dog.