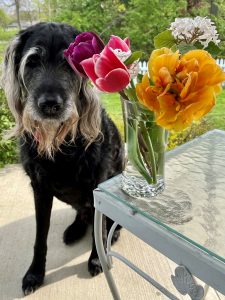 The Red-tailed hawk that comes to our back yard is still causing issues in the neighborhood.  Like an annoying relative that won’t leave after spending hours at your house, he is not getting the message that he has outstayed his welcome. The good news is that I now have some unexpected help in my mission to keep him from eating my little furry friends.

Late Sunday afternoon, Doc and I were in the backyard when we heard a ruckus from above.  We watched in amazement as two crows chased the male hawk from tree to tree and even dove in and pecked at it while it was trying to get away. I have to admit that I was anxious for those crows because they are not as big or as powerful as that hawk but it was very apparent that they were on a mission. The one thing I do know is that crows are smart, so I just had to trust they knew what they were doing.  Before long their tactic worked and the hawk flew away. We thought that the crows were probably protecting a nest and that after that mobbing that the hawk would not be back, but we were wrong.

The next day the hawk reappeared. I noticed him before Doc when I was looking out the window from our home office.  He was sitting in the tree proudly preening his feathers in the morning sun and didn’t notice the crows sneak attack coming from behind. Bam! The crows dove into him beak first and were relentless in their pursuit. I have to hand it to the hawk, he held his ground in that tree for a good hour until he figured it wasn’t worth the trouble any more and flew away.

Later, Doc remarked that she really doesn’t think that humans and animals are all that different when they are feeling threatened. “Grover, your intention in chasing the hawk last week was to protect your animal friends and the crows were trying to protect their babies, much like humans do when they or their loved ones are threatened.  I think humans sometimes forget how alike we all are to other species. The lessons from nature are so clear if we are open to what is unfolding right in front of us.”

I mulled over what Doc had just said and decided that she is much too deep and philosophical for 7am on a week day. All I know is whatever the crows and I did, the hawk has yet to return but I will stay on the look out as I have a strong feeling that he will be back.