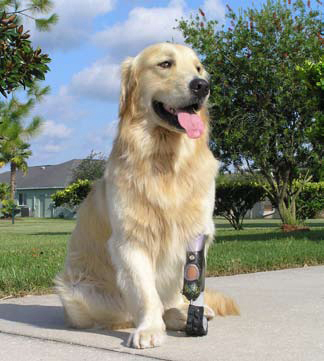 Recently I saw a TV show called ” My Bionic Pet  on the Discovery channel and one of the pet’s they featured was a special therapy dog named Journey. The thing that makes Journey special is that he was born without a paw. He is also a certified therapy dog.

As the story goes, Journey’s owners Pat and Ron Graff already had one therapy dog, but finding out about this new puppy being born without a paw, they decided to adopt him and the rest is history. The Graffs related that when Journey was a puppy his siblings did not treat him any differently, but once he left the pack he had to learn to do things on his own.  The Graffs started researching prosthetic paws before he became a therapy dog and in 2009, he was fitted with his prosthetic. Even though Journey is able to get around on just three legs, he does much better with his prosthesis.

What most people don’t know about therapy dogs is that it is important to match us doggies to the right environment. For example, Doc knows I do well with adults, but knows I am too young to be around children, even though I love them. Well for Journey, the perfect fit ended up being a hospital program that connected experienced amputees with people new to limb loss. On one occasion, a patient that had just lost her leg was surprised to see that her peer visitor was a dog with a prosthesis. The patient remarked that meeting Journey brought her hope and inspired her.

It just goes to show you that inspiration and help comes in many different forms. Sometimes, it even has four legs and a tail.