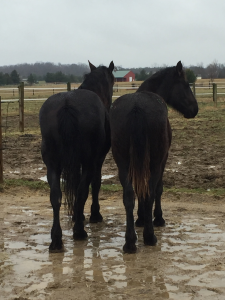 It is often said that in order for you to move forward, you must let go of the things that are holding you back. Human’s have many things that create barriers in their lives. These can include negative feelings, grudges against others, not being able to admit mistakes, defining who you are by your possessions, judging others and well, you get the idea. The great thing about being part of the animal kingdom is that we don’t have to struggle with any of those things. We have no ego, so we move on easily. In knowing that, we are sometimes called upon to assist humans in letting go of their burdens. And that is just what Doc, the horses and the other equine specialists did the other day.

The horses were already in the arena. The group members gathered and were then given the task to think of one word that represents what is keeping them stuck in their lives that they need to release. After being handed non toxic glitter markers, they were asked to write that word on the side of one of the horses. Quietly each group member wrote their word. Some of the words written were: fear, anger, loss, being scared of change, and pain. As part of the exercise, the horses would then be released into the field as a metaphor for letting go.

As the time came to open the gate and release the horses, something strange happened. The horses did not want to leave even though the gate was fully open. But isn’t that the way life is sometimes? You think you are ready to let go and move on, but you stay stuck because it feels familiar?

Just as we thought the horses would never leave the arena,  something wonderful happened. One by one the group members coaxed the horses out into the field. Watching the two horses from a distance as they gazed out across the field, you could get a sense that they felt peaceful being released back into nature.

” Be strong enough to let go and patient enough to wait for what you deserve.” Anonymous