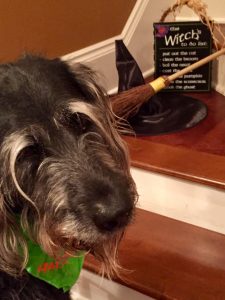 You think you know someone after living and working with them for seven years but boy was I wrong. I guess that’s what I get for snooping around in Doc’ s attic. I guess humans keep some of their biggest secrets hidden in the attic and boy did I uncover a doozy. I will give you the evidence I uncovered and then you can decide for yourself.

On Saturday Doc was putting up some more Halloween decorations on the front of the house to make it look extra spooky for Trick or Treat. She kept going up to the attic to retrieve more stuff. That attic has always been a mystery to me. She has never allowed me in there. “What could be that important?”  I said out loud to no one in particular and you guessed it, curiosity finally got the best of me. I waited until she left the house to go to the grocery store and decided that I was going to see for myself what kind of things she kept up in that darn attic that were so special.

After climbing the stairs, I slowly pushed opened the squeaky door with my paw. She had left the light on so I could see all sorts of decorations for every holiday, stacks of unopened boxes , furniture she didn’t use any more and then something in the corner caught my eye. Sitting all by itself in the back of the attic were some items that made the hair on my back stand up. Sitting in front of me was a pointed black witch hat, a broom and some instructions on old parchment paper . Shocked by what I had uncovered I picked up the paper and began to read.  The Covenant of the Witch is sacred and each time you summon the power remember that those that do not respect it can become addicted and harm will come to themselves and others.  Yikes! reading that gave me the shivers. Could Doc have been a witch all along and been casting spells on me? Just then I heard the attic door close behind me. Now I was stuck until Doc got home and I knew she would not be happy when she found me. As I nervously lay their awaiting her return I started thinking about Doc in this new light. Was Doc secretly a witch? She did bring home that little black kitten a few weeks ago. It was all starting to add up.

Finally I heard the garage door open and the back door slam. I started barking so Doc would know where I was. When I heard here come up the stairs and finally open the door I was so relieved to be free that I didn’t notice she was upset with me. ” Grover I told you not to come in this room.” she said in a stern tone.  ” Are you a witch? ” I blurted out. ” I found all your witch stuff in the corner.” Let me tell you Doc was not amused. She told me to go down stairs and then gave me a lecture on respecting other people’s space. As she told me to stay in the room to think about what I had done she narrowed her eyes, looked at me and said ” If you ever do that again Grover, I will turn you into a frog.” Then she turned on her heals and left me to take it all in. I can’t be sure, but I swear I heard her laughing in the other room.

So tomorrow night on Halloween if you look up in the sky and see a dark-haired woman on a broom in the light of the moon, it might be Doc. Now doesn’t this story make you wonder what dark secrets the people in your lives may be hiding?  Happy Halloween!