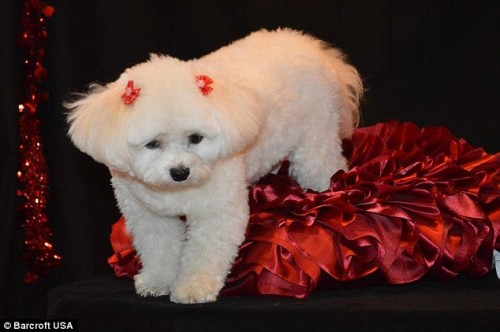 I was lying on the couch next to Doc the other evening while she was watching TV, when a news story jolted me out of my relaxed stupor. There on the television in living color, was a little doggie named Bella Mia wearing a tierra and jewels. Her human was saying she was going to leave her $200,000 when she passed away. But that’s not all, Bella Mia will also inherit the Florida vacation home, her extensive dog wardrobe, jewelry and a trust fund to pay for a caregiver.

I looked up at Doc and jokingly told her if that were me, I would be trying to find a way to have that owner declared incompetent so I could get my inheritance early. Doc looked startled then narrowed her eyes and told me that’s why she would never leave me anything but some old dog bones.

The more I thought about Bella Mia, it occurred to me that I should contact her. She could probably use a big strong male dog to look out for her and help her spend her money.

I was surprised that trying to contact the future heiress was so difficult. She had a publicist for goodness sakes, that told me she would give her the message. After a few days of not hearing from Bella Mia, I decided to go by her mansion for a visit. What I saw next, shocked me. The front yard was full of male dogs of all sizes and colors that must have had the same idea I did. Even I know when there is too much competition, so begrudgingly I left and went home. After telling Doc about my adventure she said, ” What did you expect Grover?” Later on,while laying on the couch,  I thought every thing over and came to some conclusions. It wasn’t very nice of me to just go after Bella Mia for her money. Now that she is an heiress, how will she know who really cares about her? I guess having money isn’t all it’s cracked up to be.